“I’m extremely proud to be a Black father in today’s society. For years the stigma around our culture has many times been negative, but I grew up with a great father who had a major impact on where I am today. He provided me with a template of what it means to be an engaged and invested father. And now I find myself surrounded by so many of my peers who are just amazing Black fathers who love what they do. It sounds a little corny, but I love the fact that when I scroll down my Instagram and Facebook timelines, so many of the videos are of my fellow Black fathers simply spending quality time with their kids. The best part about it is that the time spent is clearly not an obligation. They do it because they genuinely enjoy fatherhood the same way that I do.

The Black Lives Matter movement is something that has been brewing for decades. I believe that highlighting the existence of racial inequality, and the fact that it still exists, is a much needed conversation. It’s clearly uncomfortable for a lot of people to accept, and it’s so much easier to ignore it, but I never considered ignoring a problem to be a viable solution. I’ve had numerous interactions with police where I was disrespected and even once called a nigger by a female police officer who ran a stop light and almost hit me. I wasn’t disrespectful. I cooperated. I was wearing a suit in the middle of the workday in downtown Philadelphia. None of that mattered because in her mind, I was a young Black male, so showing me respect was not something she had to do.

I hope that the increased attention and conversation that is currently taking place will have a positive effect moving forward into the future. It seems that race relations have regressed in the past decade or so, and if that trend continues it can definitely lead to some turbulent times.

I think it’s important to emphasize the amount of effort put forth and pride that Black men take in being fathers to counter the long held belief that we are absent by default. That is far from the truth. We are just as committed and vested in the experience that is fatherhood. We are blessed to have many more opportunities than those that came before us, and look forward to setting up our children to be even better off than us.”

Prev This is Us | Philadelphia Family Photographer
Next Isaiah (#2) 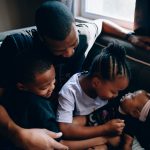